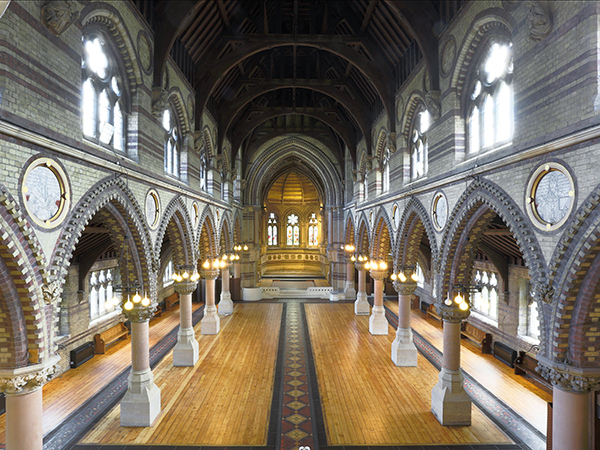 In 2015 we were asked by London Stone Conservation to join the conservation project of the alabaster sgraffito roundels at St Stephen’s Church in Hampstead.

Sgafffito is an ancient technique where the surface of the substrate (in this case alabaster) is scratched or chiselled, before being filled with tinted contrasting plaster. The surface and filler are then finely polished to create decorative schemes and patterns. The name comes from the Italian, and literally means ‘scratched’.

The 10 roundels at St Stephen’s depict Saints and religious figures and are situated on each of the spandrels throughout the nave. The alabaster disc is contained within a Bath stone frame, with gilt and polychrome decoration.

The alabaster surfaces were carefully cleaned using a non-aqueous agent and soft sponges. The Bath stone surround was cleaned using non-ionic detergent to emulsify and remove the heavy build-up of dirt and moisture staining. Following analysis of the historic paint layers and site samples, a match was prepared for the original colour and characteristics of the red oxide border. The borders were repainted by hand to the original lines and arrangement and the quatrefoil patterns oil gilt using gold leaf. To further protect the alabaster discs, two layers of microcrystalline wax were applied to the surface.