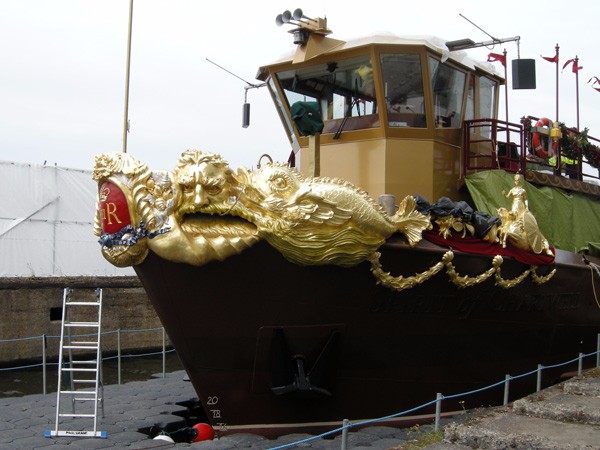 In early 2012 we were invited to take part in the making of the royal barge which was used to ferry the Queen and family down the River Thames on the day of the Diamond Jubilee.

The former head of Historic Carving at C&G of London Art School, Alan Lamb, who led the design team for the prow sculpture of the Queen’s Barge, brought in The Woodcarving Studio to collaborate on the works. They were based on 17th and 18th century royal equivalents at an extraordinary scale. Ornamentation included the design of the prow sculpture, the top deck and the canopy under which the royal family would be seated. Once approved by the Pageant Committee and Buckingham Palace, a 1:1 scale model of the actual prow sculpture in clay was achieved.

We were commissioned to model the heraldic dolphins. Despite extensive experience with heraldic supporters, the sheer size of the giant dolphins was a challenge in itself. We were also commissioned to carve a section of the Queen’s canopy, again based on the specific design of Alan Lamb. On completion of carving the four-meter-long frieze, a silicon mould was taken from which casts would recreate the entire length of the panelled canopy. All panel sections were gilded in 23 ½ carat English gold leaf.

Please refer to the attached links for more information on the Royal Barge.