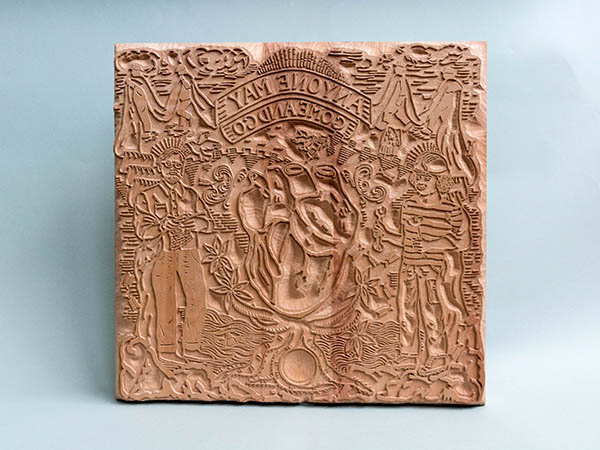 Tillet block is a woodcut print block which was used in the wool industry during the 17th and 18th centuries. The exported textile was wrapped in coarse cloth known as tillet and tillets are decorated with ornate prints which acted as a company brand mark. This branding system included the manufactures information, which also served as part of a quality control system. These wooden print blocks were specially commissioned to add elaborately carved designs of the individual manufacturers.

We were commissioned by Preston Street Union a group of artists who have been commissioned by the Royal Albert Memorial Museum in Exeter to create new work with the theme of migration for an exhibition in early 2020. They drew inspiration from Exeter’s historic wool trade and wanted to make a new tillet block from which to print out their contemporary design.

Our task was to create a print block following the original process as close as possible.

We have constructed a Tillet block of 420mm x 420mm x 60mm by laminating four layers of timber. The first layer is 20mm thick steamed pear, and the rest of the layers are in Russian redwood. Each layer was glued in the perpendicular grain direction to the one before. This layering process made the tillet block more stable from any movement within the timber.

Once the block was prepared, the design from the Preston Street Union was transferred onto the steamed pear top layer of the block. We have used graphite paper to trace every detail of the design exactly. This is a common technique for a wood carver to transfer designs on to the wood.

The design on the block is carved in relief and is a mirror image of the printed image at the end. The depth of the carving varies from 3mm to 15mm deep, and bent chisels were used extensively for the process. The challenge of the project was to carve a very intricate design with some of the details around about 1mm in width. Unfortunately, during our research, we weren’t able to find out what kind of timber was originally used for tillet blocks. However, Pear wood, being dense and tight-grained was commonly used by William Morris in hand-cut woodblock designs, because it takes fine detail.